Showing posts from October, 2009
Show all

October 30, 2009
I'm now selling prints of some of my artworks on DeviantArt.com. Right now I've only got two on there. I may not have prints available in all sizes but I'll try to get as many sizes on there as I can. You can go right to the prints for sale here, or you can click on the DeviantArt section off to the right of my blog and go to the Prints for Sale folder of my gallery.
Post a Comment
Read more 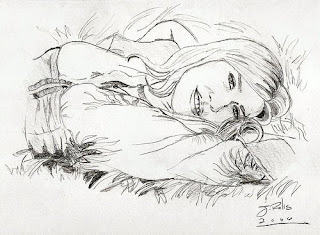 October 23, 2009
As you may have noticed I have links to other blogs and sites in a list off to the right of my blog. One of them is Zine Reviews by Jolie Noggle. She posted a review on her blog where she mentions my site, so I thought I'd return the favor by letting you know about her site. Jolie is the wife of a classmate of mine, and on her site she vlogs reviews of zines and sites and things. Some content on there is not suitable for children. To check it out go here or click on the link in the Links list.
Post a Comment
Read more 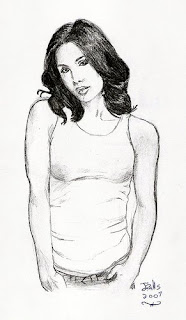 Today is a twofer. If I'd posted this yesterday I could have called it a Tuesday twofer. First is the drawing above of Eliza Dushku. I tend to title my blog posts after the artworks I'm posting, unless I'm not posting one. This one is titled "Eliza Patricia Dushku". I don't know how many drawings I've done of Eliza now but she's one of my favorite people to draw.

This one is titled "Ghoul". I think it's one of the pictures I doodled in high school during Study Hall. I figured this is a good month to post any horror themed drawings, since it's the month of Halloween.
Post a Comment
Read more 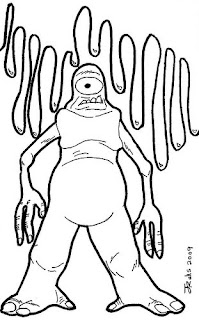 I thought it would be cool to make up my own ghost for the Ghostbusters to bust, and here's what I came up with. It's awkward looking but all the Ghostbusters ghosts look odd, so I think it works. There will, hopefully, be a Ghostbusters III in the next few years. A script has been written and Ivan Reitman is going to direct, and all of the original cast will be back with the exception of Rick Moranis, unless he decides to return and they write his character into the script. And supposedly there will be new additions to the Ghostbusters team. The original GBs will be their mentors. That's what the people involved with the movie have said. I'm looking forward to Ghostbusters III. I hope they make it.
Post a Comment
Read more 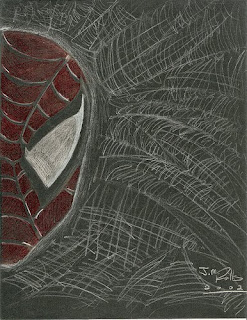 Here's a picture I drew of Spider-man in 2002. I think at the time I was considering drawing Spider-man in the style of the movie. Some comic book artists have their own way of drawing Spider-man. I was thinking if I get into the comics business at some point I'd draw Spider-man the way he looks in the movie. Other artists in the biz have done that. I don't know if I'd still do that. There's going to be a Venom movie. I've seen articles about it on comic book and movie news sites. Honestly I wouldn't mind if they recast Eddie Brock/Venom. I'm one of the people who liked Spider-man 3 and Topher Grace is a good actor but he didn't seem like Eddie Brock/Venom. Brock is a big, bulky, muscular guy with a bad attitude. Topher Grace wasn't that muscular compared to the comics version and he played Brock as an egotistical, whiny young punk. Eddie Brock never would've been so whiny and I don't think he would've asked God to kill P…
Post a Comment
Read more 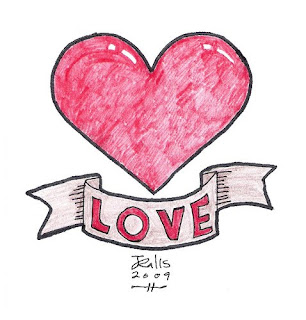 This is the third in my series of virtue drawings. I drew this in pencil and then went over the lines with a black Sharpie and a black ink pen. Then I colored the heart and "LOVE" with a red Sharpie. After that I colored the banner with a brown colored pencil. There are actually lots more virtues I could draw. Who knows. Maybe I'll draw them some time.
Post a Comment
Read more 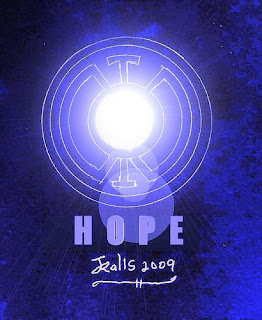 I did the hope drawing tonight that I mentioned doing last night. I decided to use the Blue Lantern symbol from the Green Lantern comics. I drew it on paper as I do with most of my drawings, then scanned it and played with it in photoshop. There are several different colors of Lanterns now in the Green Lantern comics. I haven't kept up that well lately because I don't make it over to the place I buy comics at very often. I actually haven't been there in awhile. I'm hoping to go once a month eventually. Course I could also subscribe to Green Lantern. Next up I think I'll do a drawing representing love. I'll blog that some time this week.
Post a Comment
Read more 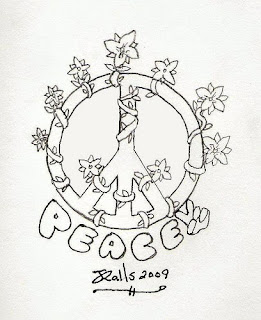 I got a couple Boyd's Bears ornaments at Lowe's today and one is holding a tag that says "peace" and the other is holding a tag that says "hope". They inspired me to do this drawing of a peace sign. The sign itself is from the 60s, but I made it especially 60s by putting flowers on it and the word "peace" below it with the peace hand gesture next to it. I think I'll do a hope drawing too. I took another math quiz this week, this one for chapter 4 in my math book. I usually have my sister with me just in case I need help, because she's better at math than I am. This time I did it on my own and I got 76.2%. Which is pretty good.
Post a Comment
Read more
More posts